Hi everyone. I’m going to be away from the sim for about a week or so. If you’re new here, please enjoy reading the archives or perhaps checking out the YouTube channel. Thanks for stopping by, and I’ll be back on the blog soon …

Hi everyone. The basement sim is starting to get a fair numbers of followers over on YouTube, and one of the common questions I’m getting is about the dimensions of the sim. I used Google Sketchup as a basic CAD program in the design, but made some modifications so the original Sketchup file isn’t ready for sharing. So today I just got out a ruler and made some measurements, and drew the attached. I hope it’s helpful to those thinking about building their own GA cockpit, and I’ll try to get the Sketchup file posted eventually.

Here’s the basic dimensions, all in INCHES. You may click this to make it larger or right-click to download it. 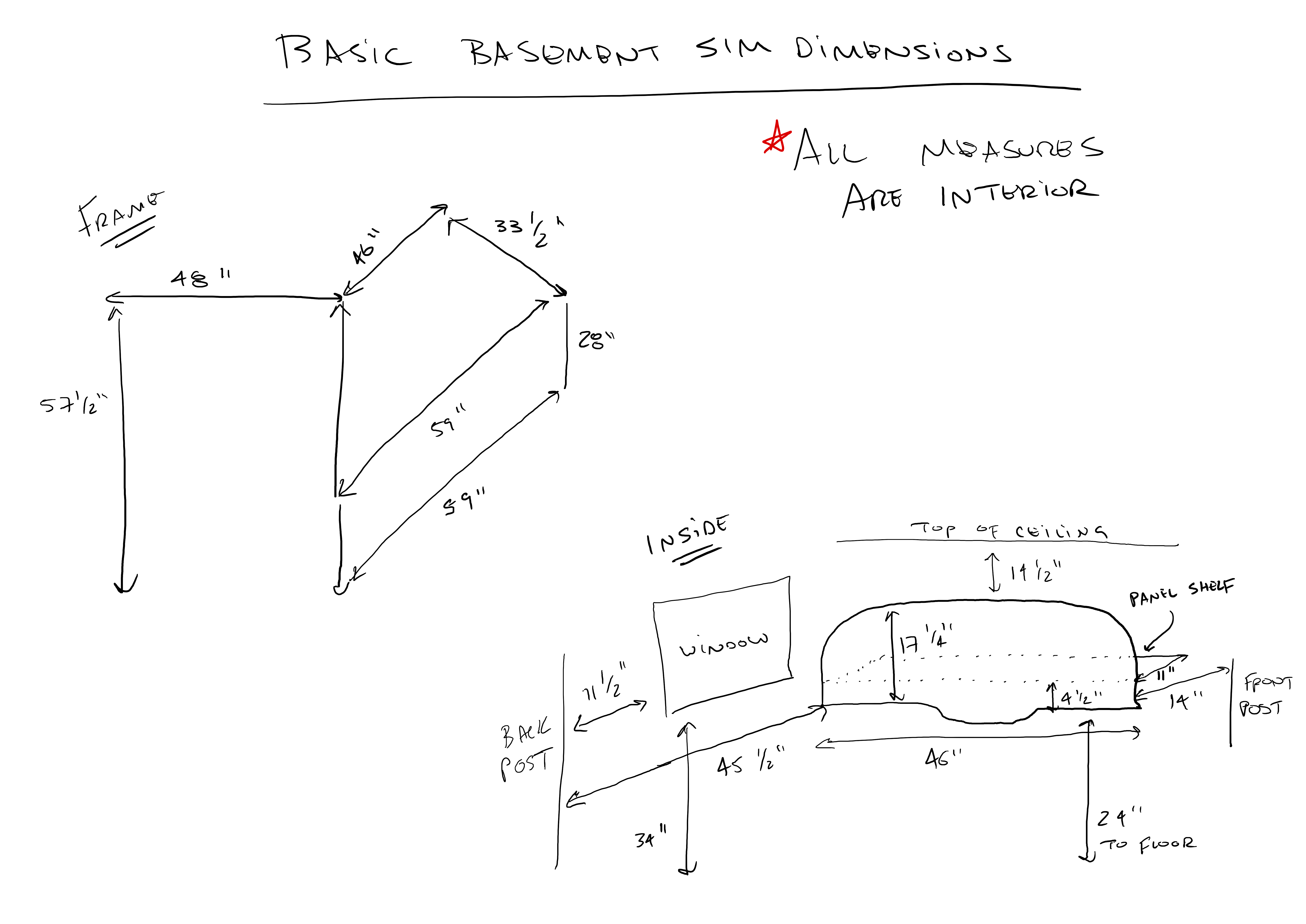 A YouTube viewer requested more first-person video, so here’s an attempt on a simulated flight from Jackson Hole to West Yellowstone. It illustrates some great Orbx North America land class scenery, and includes a valuable lesson on density altitude and proper mixture. I hope you like it and thanks for watching. Details:

Here’s a quick tour of the Spokane, Washington area, including a loop around Coeur d’Alene and Mount Spokane. This is for my brother, who lives in the area. Hope you like it, and thanks for watching!

Stalls, Turns, And An Engine Out Over Bakersfield (On PilotEdge)

Recreating some maneuvers from a recent real-world lesson, using the PilotEdge network and ORBX SoCal scenery (Bakersfield). Stalls, steep turns, turns around a point, engine out procedure with go-around, and a return to 30R at KBFL.

Best moment of the video for me is when I say “flops” instead of “flaps.”

I came across this very long list of A2A aircraft repaints. Very cool. I’d like to get this one for the Comanche (but first I need the Comanche!). (Also, original source is here.) 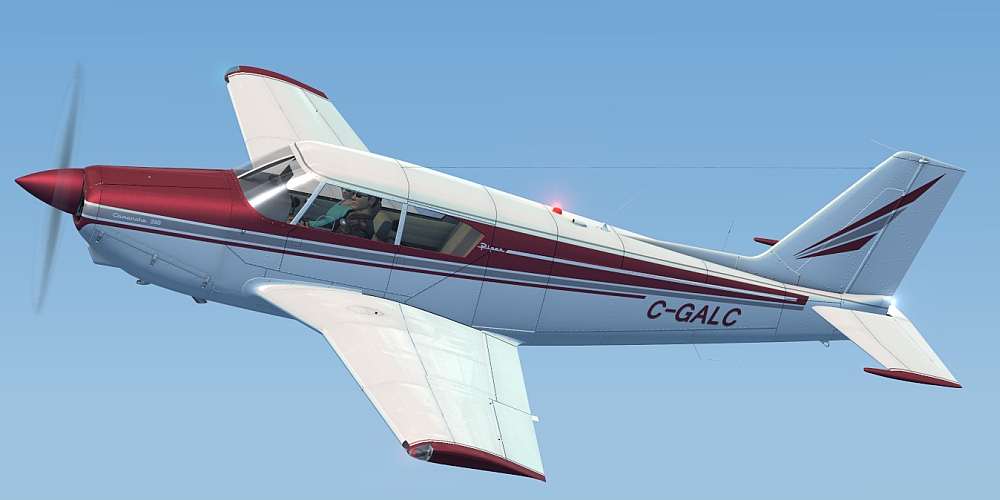 After my flight lesson yesterday my CFI did something cool. During the debrief he asked me to look at a website with him, CloudAhoy. This site apparently links to an app on his iPhone that, when activated, tracks our flight and uploads it to the CloudAhoy servers. I know ForeFlight does this, but what’s cool about CloudAhoy is that it reads the data of the flight and tags it for debrief purposes. It automatically detects the sections of slow flight, stalls, steep turns, etc., and overlays it on Google Earth imagery of the terrain (or VFR sectionals
or IFR charts) so you can debrief the different sections of your training flight. It also can overlay the wind vectors, which is helpful for checking turns around a point, pattern work, etc.

Here is the overhead image of yesterday’s flight. He turned the app on after I had done IFR work with the foggles on, so the track doesn’t include the first third or so of our lesson. Like all the pics I post here you can click it to see it full-sized. The red sections are stalls, the spaghetti section in the middle was steep turns left and right, and the circles were turns around a point. 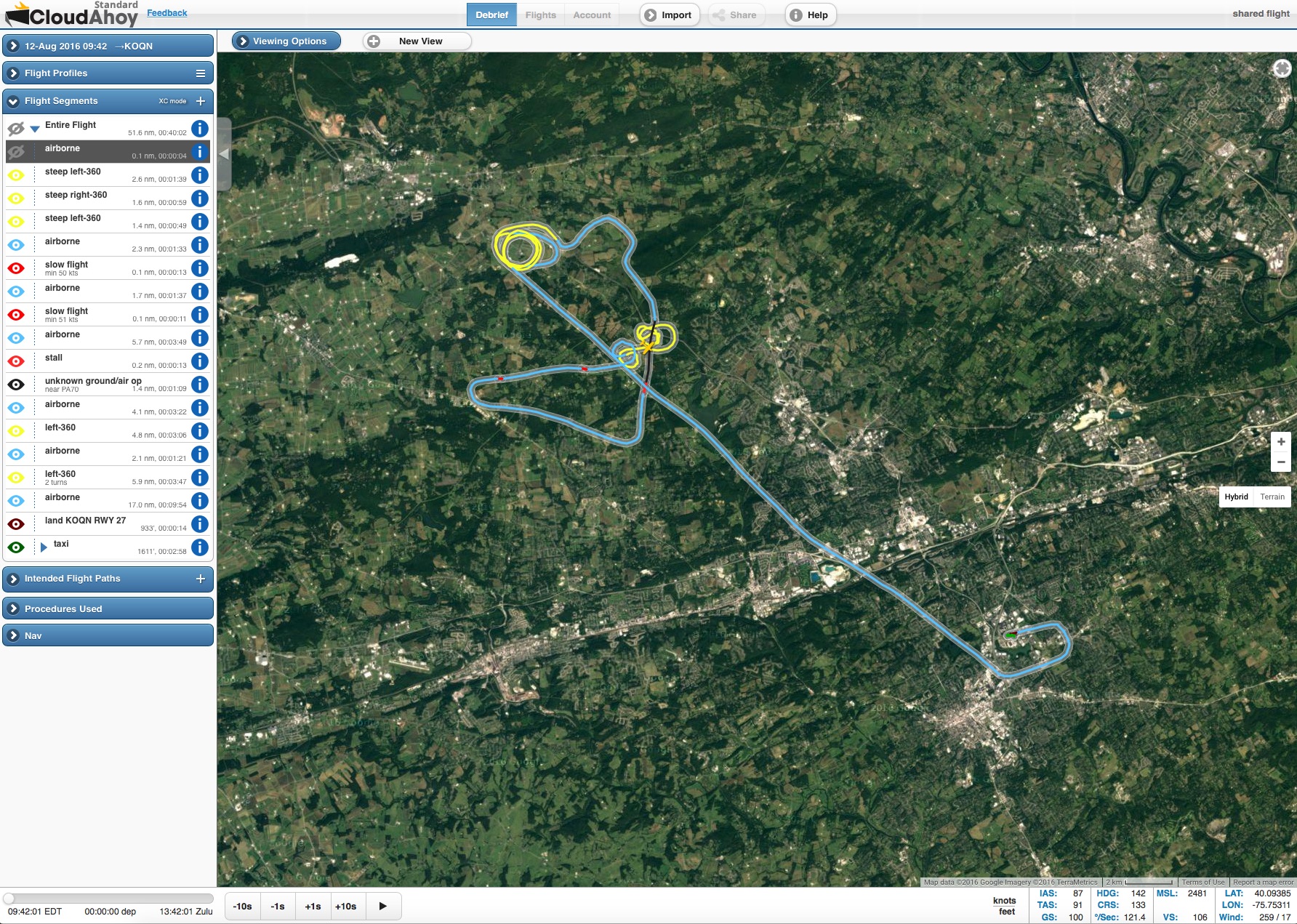 The controls at the bottom of the screen allow you to replay the flight in real time, or at faster or slower speeds, and the segments on the left allow you to skip to particular parts of the flight the app has tracked. Very cool. Even more cool is that CloudAhoy can render the flight track in 3D. Look at this …

Here’s my landing pattern, with a few hitches from where the app probably lost GPS or cell tower contact on the approach: 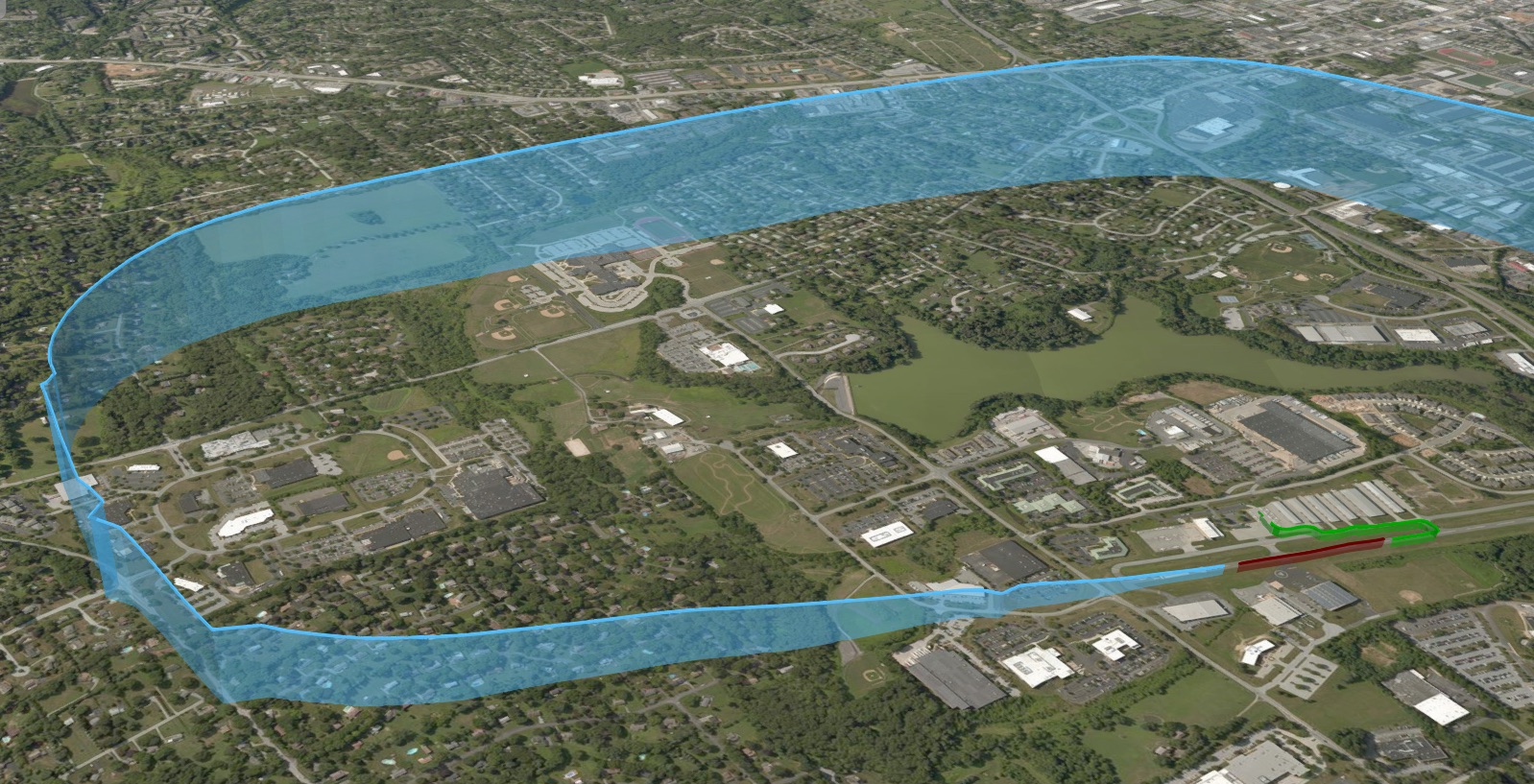 Finally, you can replay the flight from the cockpit, with a view like this: 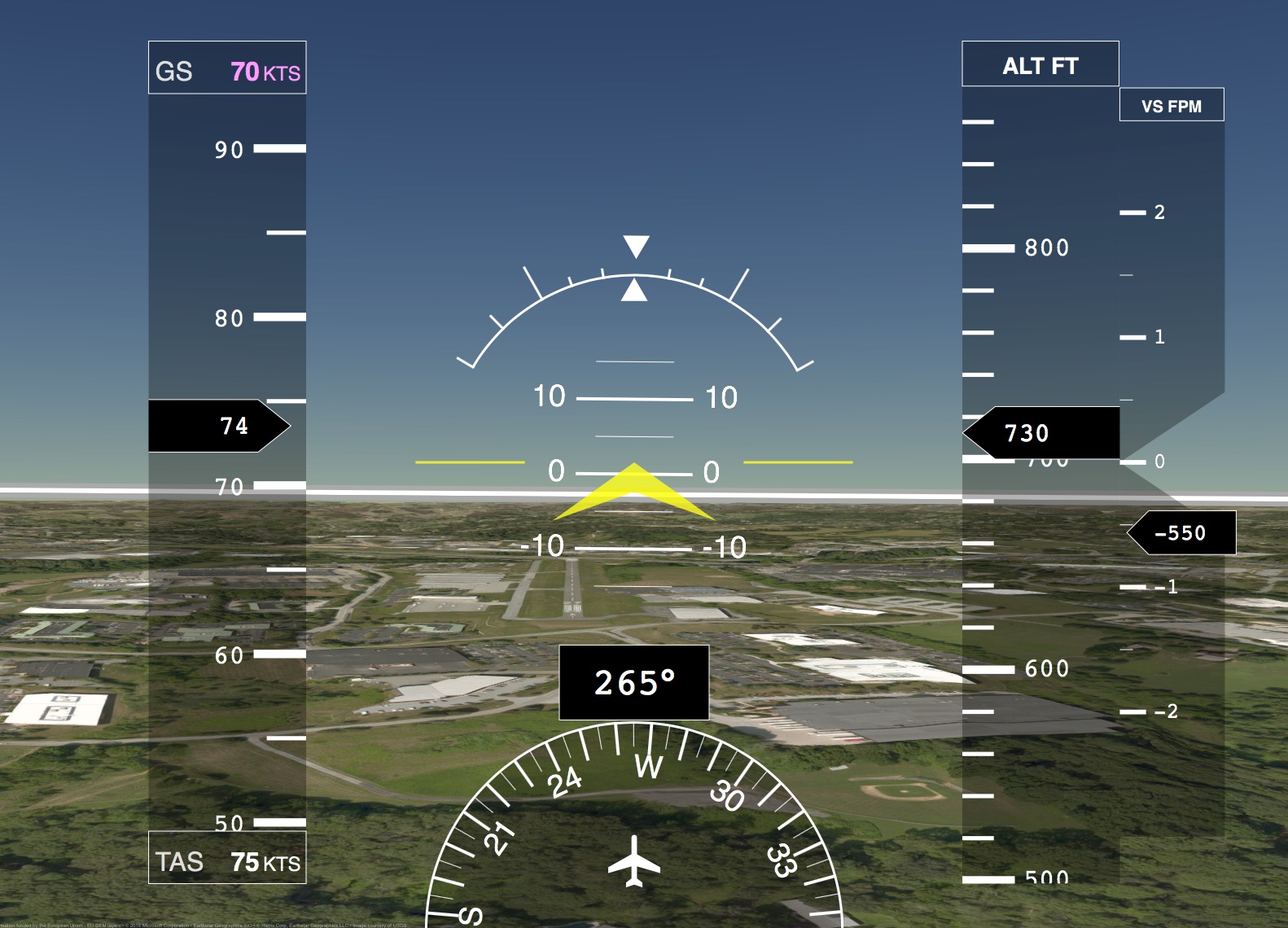 I just replayed this part of the flight and monitored my speed on the approach. I did pretty well. Was still around 83 knots or so on base, but was through the 70s on final and right at 63 (the indicated landing speed for this airplane) over the threshold. I can see this is going to be a valuable tool in my instruction. You can see the flight yourself by clicking here.

There is a free version of the CloudAhoy service, but it’s limited in what you can debrief and share. The full subscription is $45 per year, and it immediately seems worth it to me as a student pilot. I’ll be signing up. And finally, you can connect the service with X-Plane, FSX, and Prepar3d as well. I’ll try this today, as it would be cool to track simulated training flights from the basement sim.

Needs a wash, but it sure is fun to fly. 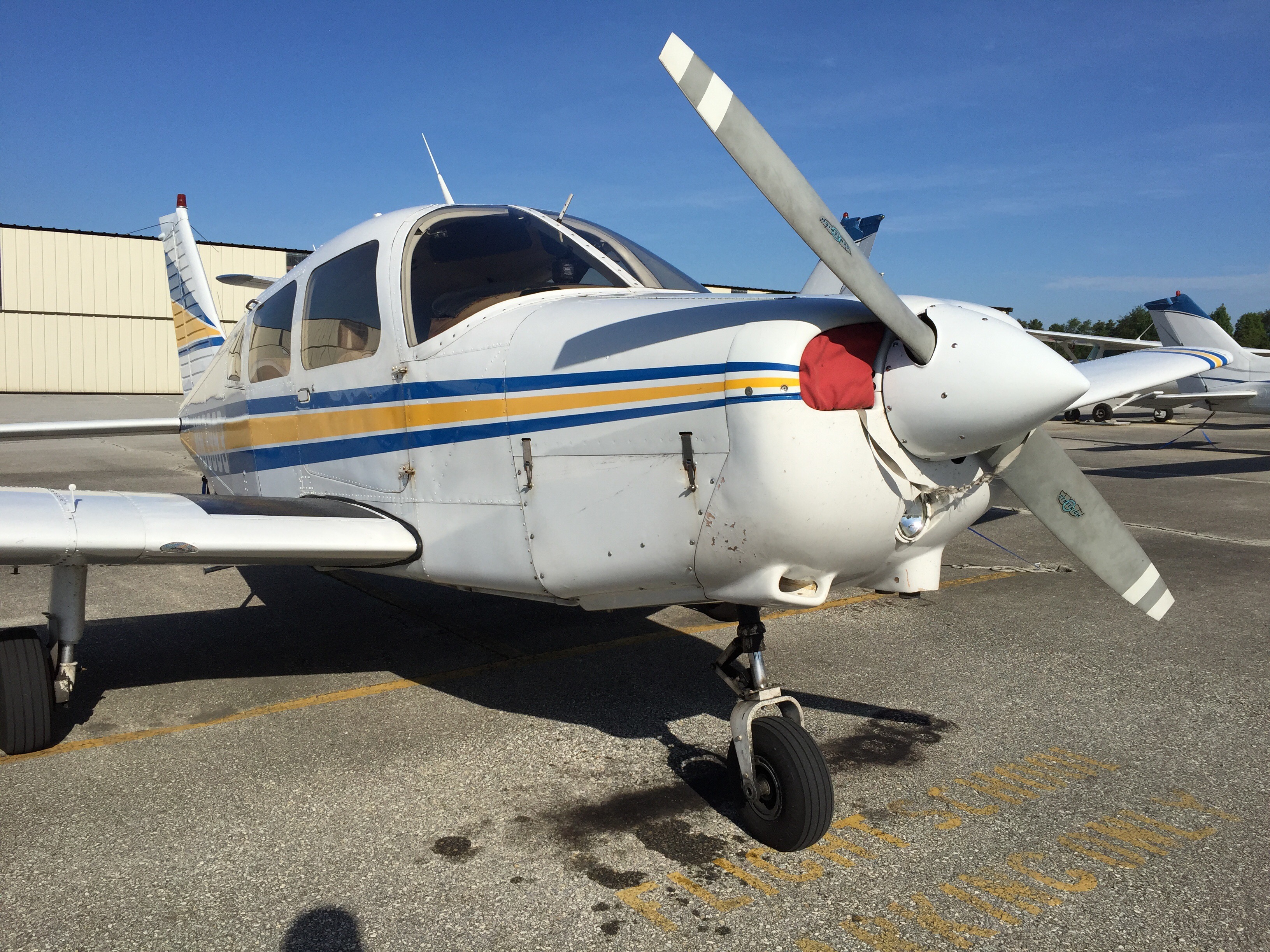 … to see this Pilatus warming up on the ramp yesterday. If you’re going to go someplace with a single prop, this guy’s about the fastest way to get there.

There’s no room in the basement for this. Maybe the garage?