First, to those celebrating in the States (but really to everyone), happy Thanksgiving and thanks for your support through the past three years.

Those watching my recent VR streams know that I have struggled with performance issues. This goes back quite a time, actually — ever since I got the 1080ti, although they have been worse since I replaced the Rift with the Rift S.

The problem: after loading with great performance, as high as 50-60 FPS in VR, the graphics card after a few minutes goes to 100% load on 3D processing and the frames crater. Even more interesting is that the situation is persistent — once it begins nothing seems to fix it, including turning down sliders.

Today after some significant testing I think I’ve found the source of the problem: hyperthreading. I turned hyperthreading on my PC off, running on the four physical cores rather than eight virtual. (Yes, I already had threading support off in the GPU). While I was at it I also upped my CPU overclock to 4.8 from 4.6, without any real negative effect. And almost instantly the GPU performance improved and stayed rock-solid, as did temps on the GPU core. This is all good news as the situation has been driving me nuts. We will see if it lasts, but so far, it seems that for whatever reason X-Plane, the Rift S, the 1080ti, and hyperthreading were not playing well together. 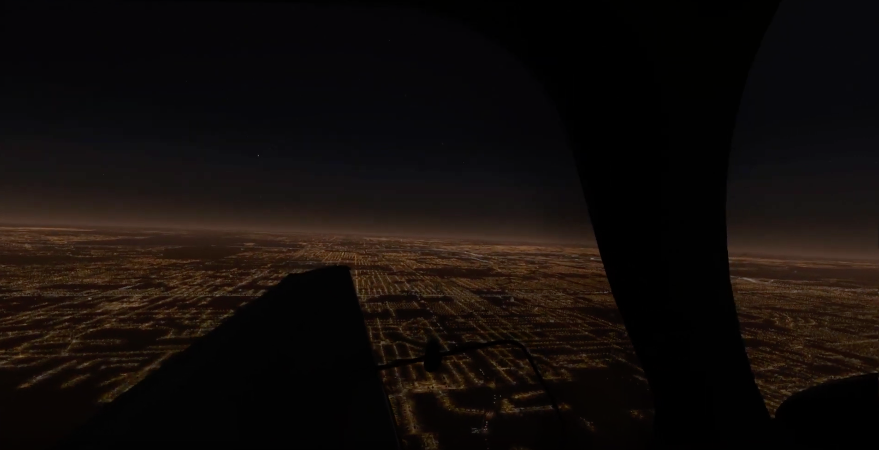 Now that I’ve wiped the PC drive, reinstalled Windows 10, and upgraded to 64G RAM, I wanted to begin testing the new PC environment with VR. I’d also been reading about two add-ins for X-Plane 11: Traffic Global from Just Flight (payware), and the extended night lighting scenery download from the .ORG (donationware), and was eager to test them out. Finally, I’d read about some new configuration settings for Oculus Mirror (which I use to stream VR sessions from the Rift S) that apparently create a mirror more representative of what I see in the headset, and less likely to promote motion sickness for those watching, and wanted to test those settings out, too.

So, last night after the kids were in bed, I decided it was testing time. I loaded up the VFlyte SR-20 at KTPA (my custom airport model), activated Traffic Global, and went for a spin. There is a video below, including a random simulator crash at the very end. Not sure what caused it, but it was an X-Plane crash as the PC kept running. Regardless, early impressions are that my VR performance is better — higher frame rates generally, and smoother performance especially using Asynchronous Spacewarp. My impression of Traffic Global is that I’m very impressed. Great injection of real-world traffic, great models and animation, and no real frame-rate hit that I can see. My impression of the extended night lighting scenery is WOW! Beautiful, with lights all the way to the horizon, and again, little to no frame-rate impact that I can see — although I’ll do more testing to get a better sense of that. The image up top is a screen grab of what it produces, and again, here’s a video.

Oh, one final thing: for this video I just used the default Oculus Rift S headset and mic rather than my aviation headset. I think it worked really well, even if it doesn’t sound like an aviation headset. It’s certainly more comfortable.

I’m happy to say that last week I passed my instrument rating check ride. I’m looking forward to flying in the system and building my proficiency with this new skill set. Thanks for all the encouragement along the way.

I also replaced the RAM in the sim yesterday, pulling the two 8 gig strips that shipped with the machine and replacing them with four 16 gig strips. This means the sim now has 64 gig RAM on board, and while it initially messed up my overclocking settings, with some tweaking the sim is running stable. While I have not noticed a frame rate improvement (nor did I expect to), the sim is now very smooth with little to no stutters.

I’ve been getting hard crashes, all the way to a reboot, when streaming. I thought the El Gato camera card was the problem, but the crashes continued after getting a new camera card last week. So I decided that today was the day to completely wipe the PC Windows drive and do a full and fresh install of the operating system. That drive has never been wiped since I bought the PC four years ago, and it was crammed full of legacy registry entries and other junk from years of use (and using FSX, P3D and X-Plane along the way). I very deliberately run X-Plane from a separate SD drive, so it would be unaffected by a change like this — and it’s a reason that you should probably run X-Plane from its own dedicated drive, too. (In fact, I have X-Plane and its associated programs on one drive, and all my ORBX and ortho scenery on a different drive, just so they won’t be affected by any Windows problems or updates — in fact, I could buy a new PC, plug in those drives, and be good to go for the most part).

So far, it seems everything has turned out OK. It took a while to download some drivers, and I’ve had to update a few settings that changed with the new installation, but now I have a clean Windows drive that’s loaded only with a bare-bones install of Windows 10, Navigraph’s data install program, Active Sky XP, Project Lasso, and the OBS streaming software. I have not noticed a significant increase in performance, but the sim seems to be running very smoothly — and no crashes so far. With any luck tomorrow I’ll get in a stream for testing.

Simulated an IFR flight from Olympia to Everett yesterday in the home cockpit. This is over the ORBX Washington True Earth HD scenery, but you don’t really see much of it because the real weather (using ActiveSky XP) was poor. Route was OLM V287 PAE 7000 ft / RNAV Y 16R on PilotEdge. We go down nearly to minimums on the approach, and have an unexpected icing event along the way. This is X-Plane 11 and a Cirrus SR-20 flight model.