I’m a big fan of Chris Bell’s fantastic Night Environment add-on for P3D, which brings realistic “to the horizon” night lighting environments to the simulator. You can see a video of me flying in his Pennsylvania package here.

So it’s natural that I’m excited about Chris’s latest project, Black Marble, which will bring highly detailed vector-level road lighting to the entire planet. Given that night lighting has always been a weakness for P3D, this could be transformative add-on for the simulator. You can learn more about it here, and here are some recent shots released by Chris. I’ll be downloading this immediately upon availability. 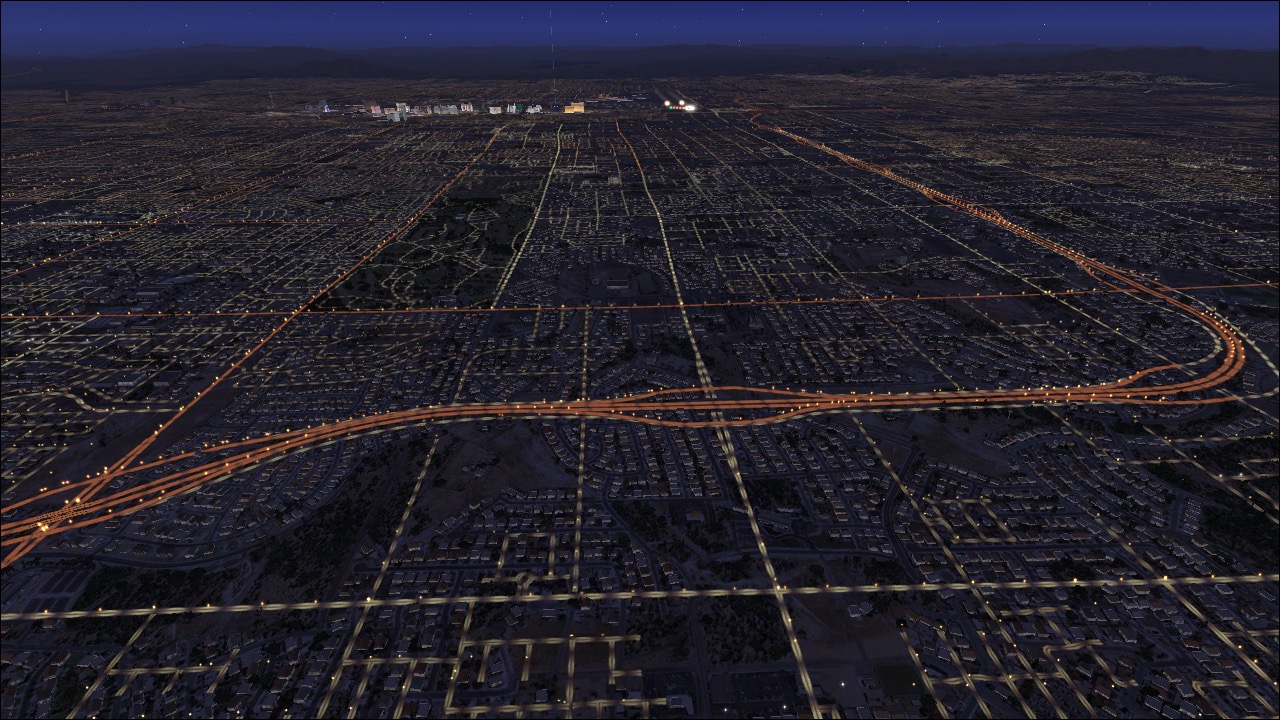 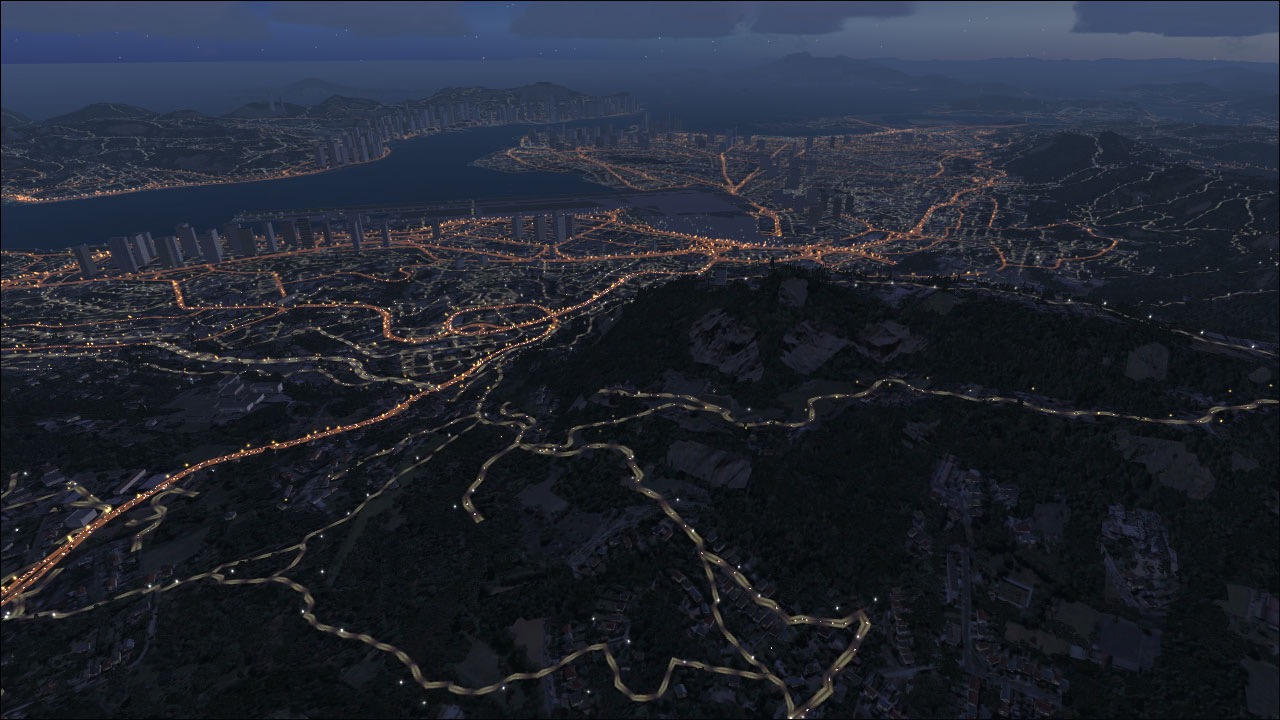 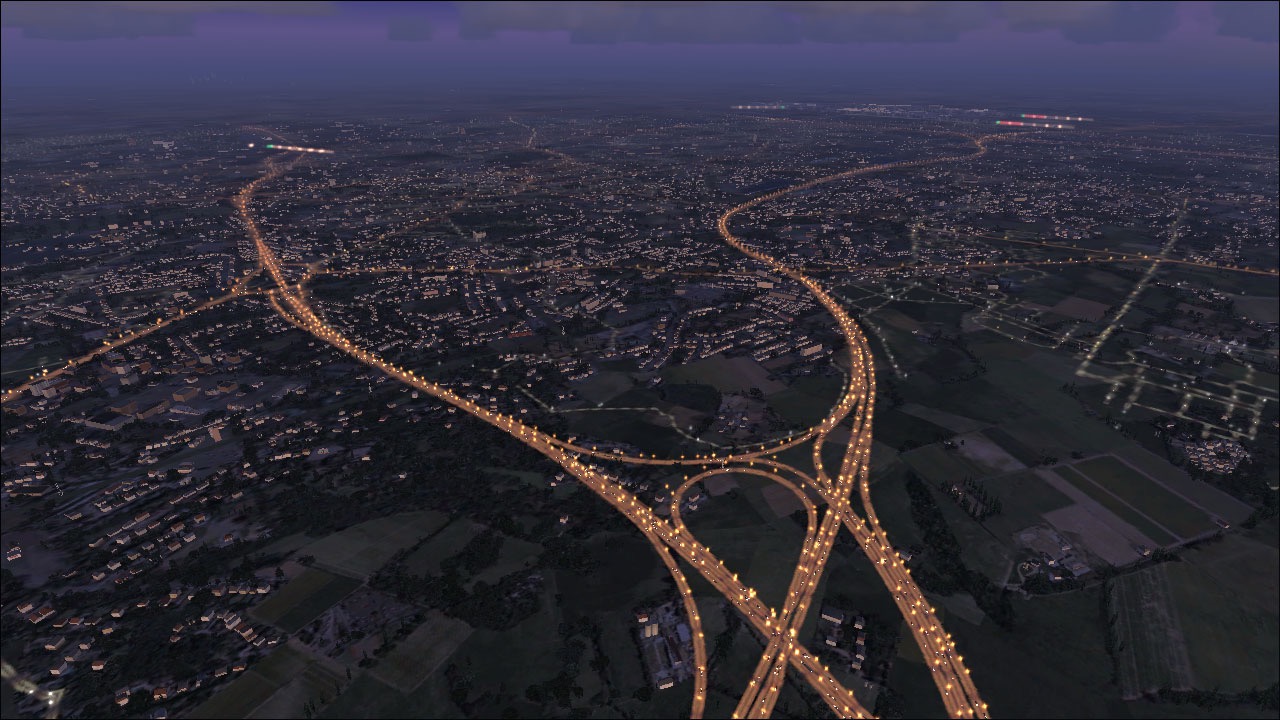 And here’s a before/after comparison …
Before: 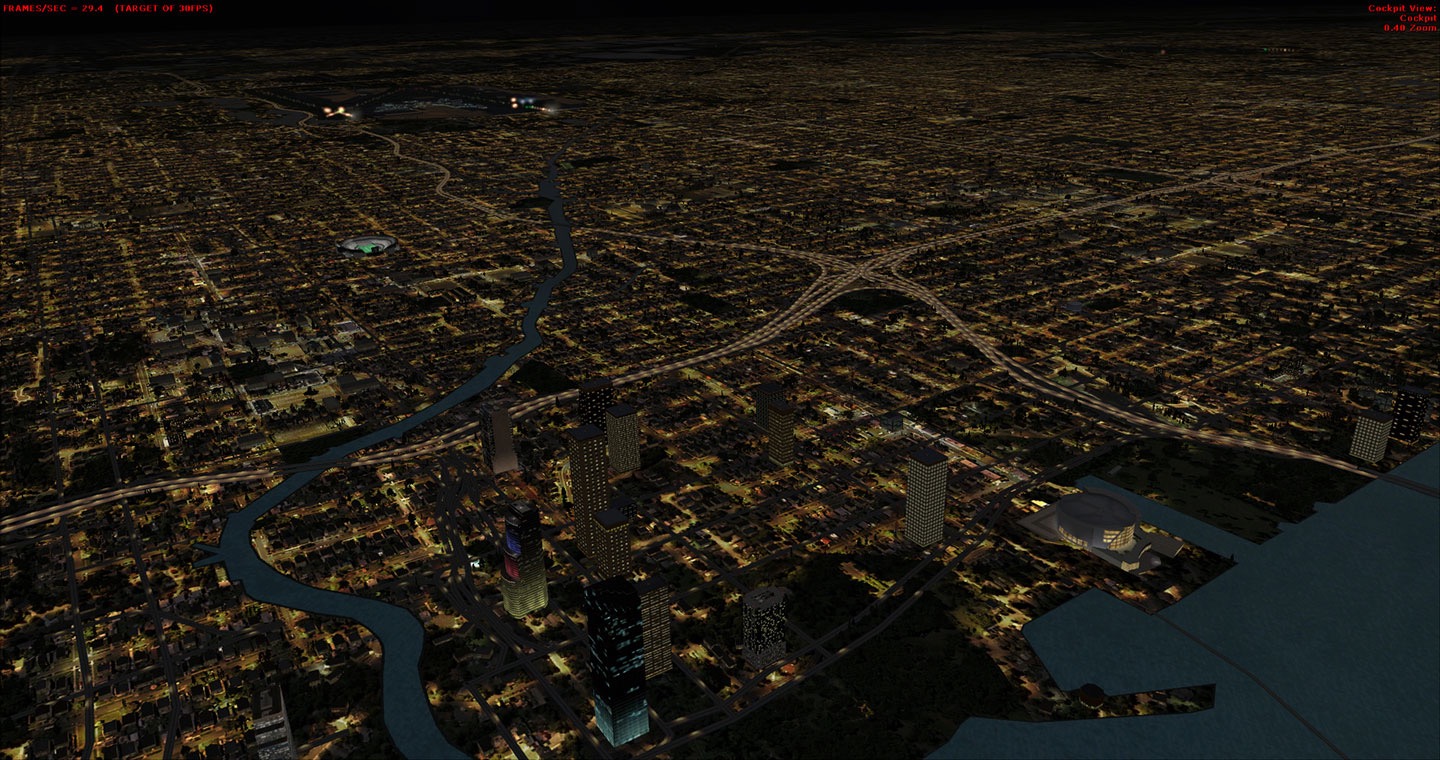 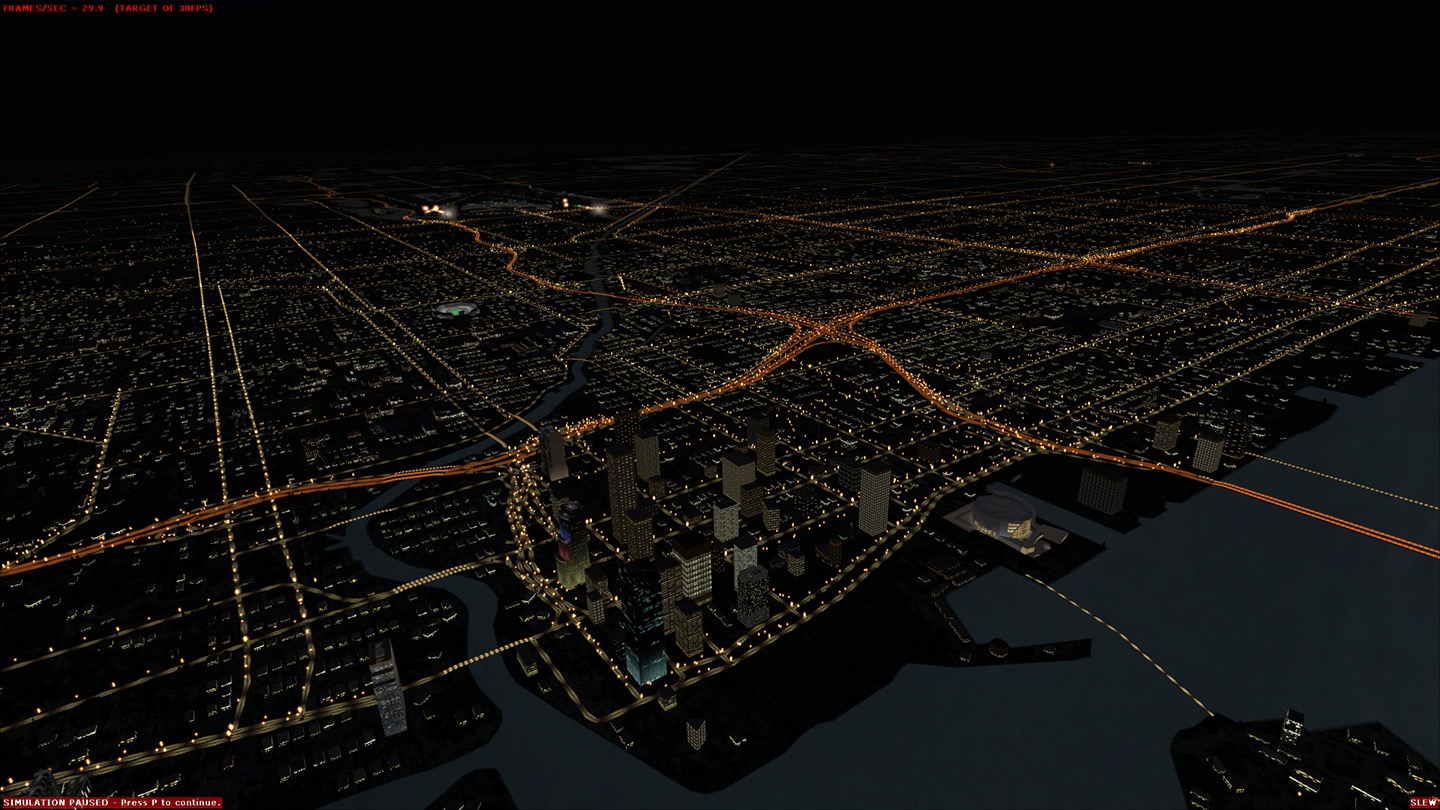 On of my viewers and readers is Alex, who has a nice YouTube channel under “Alex’s Flying Club,” and a blog that’s just getting off the ground at https://abovegroundlevelblog.wordpress.com/. He, too, is in real-world flight training, and I hope he continues to publish as his simulation and flying experience grows.

Tom Tsui at FSX Times has another gauge update out, this time for the RealAir Duke. Great for your Saitek FIPs.

Since my last PilotEdge Alphabet Challenge post I’ve flown two more legs of the challenge: G (Grand Canyon) to H (Lake Havasu City) and H (Havasu) to I (Laughlin/Bullhead, which is KIFP). Here’s the current map (which you may click to see full-size): 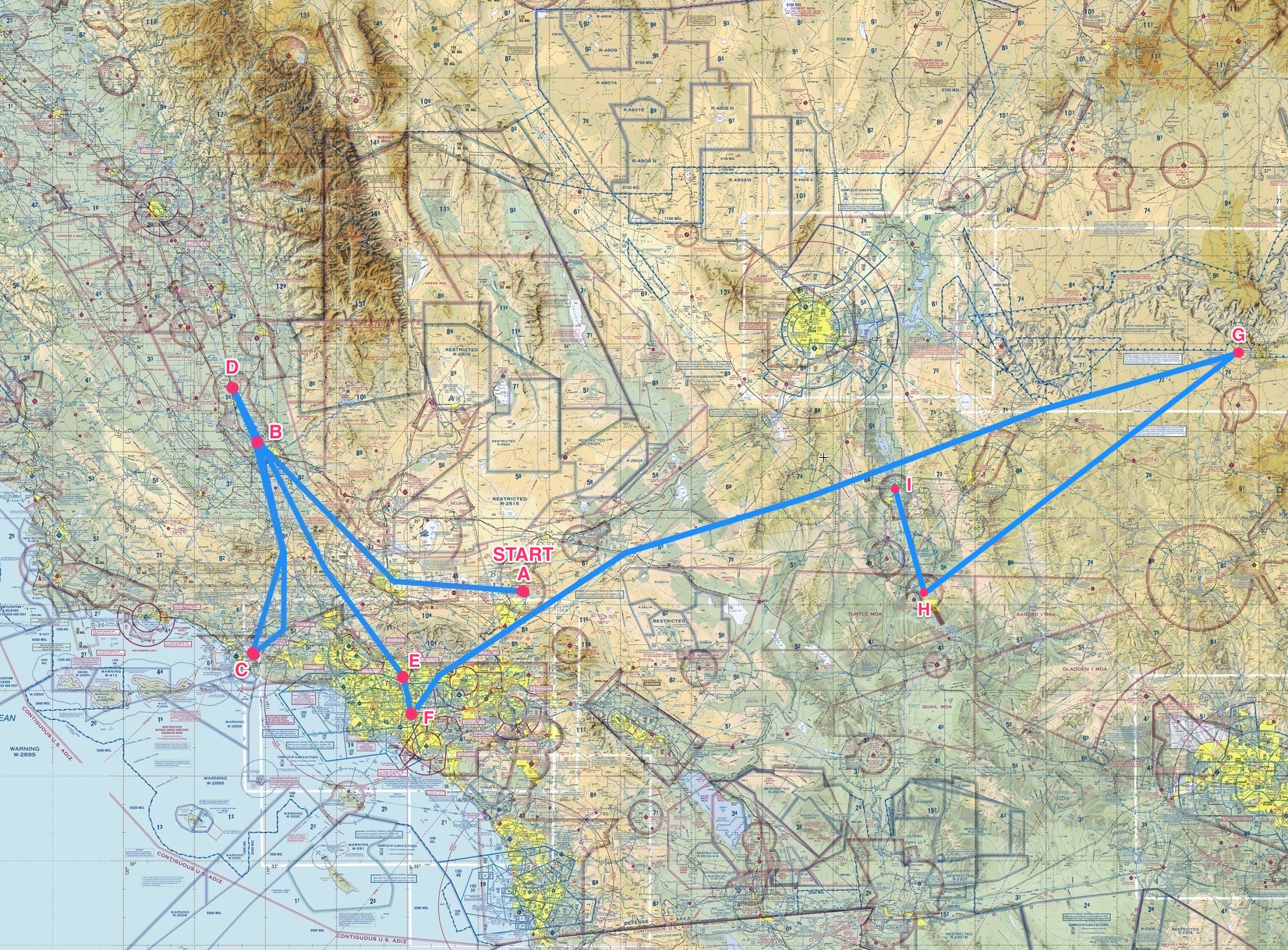 Next up is Laughlin to Jacqueline Cochran Regional airport, just south of Indio, CA and just northwest of the Salton Sea.

One of my readers sent in a photo of his simulator, which is an A-10 Warthog that he uses for combat flight simulation and dogfighting. It’s really cool, and he gave me permission to post the photo. 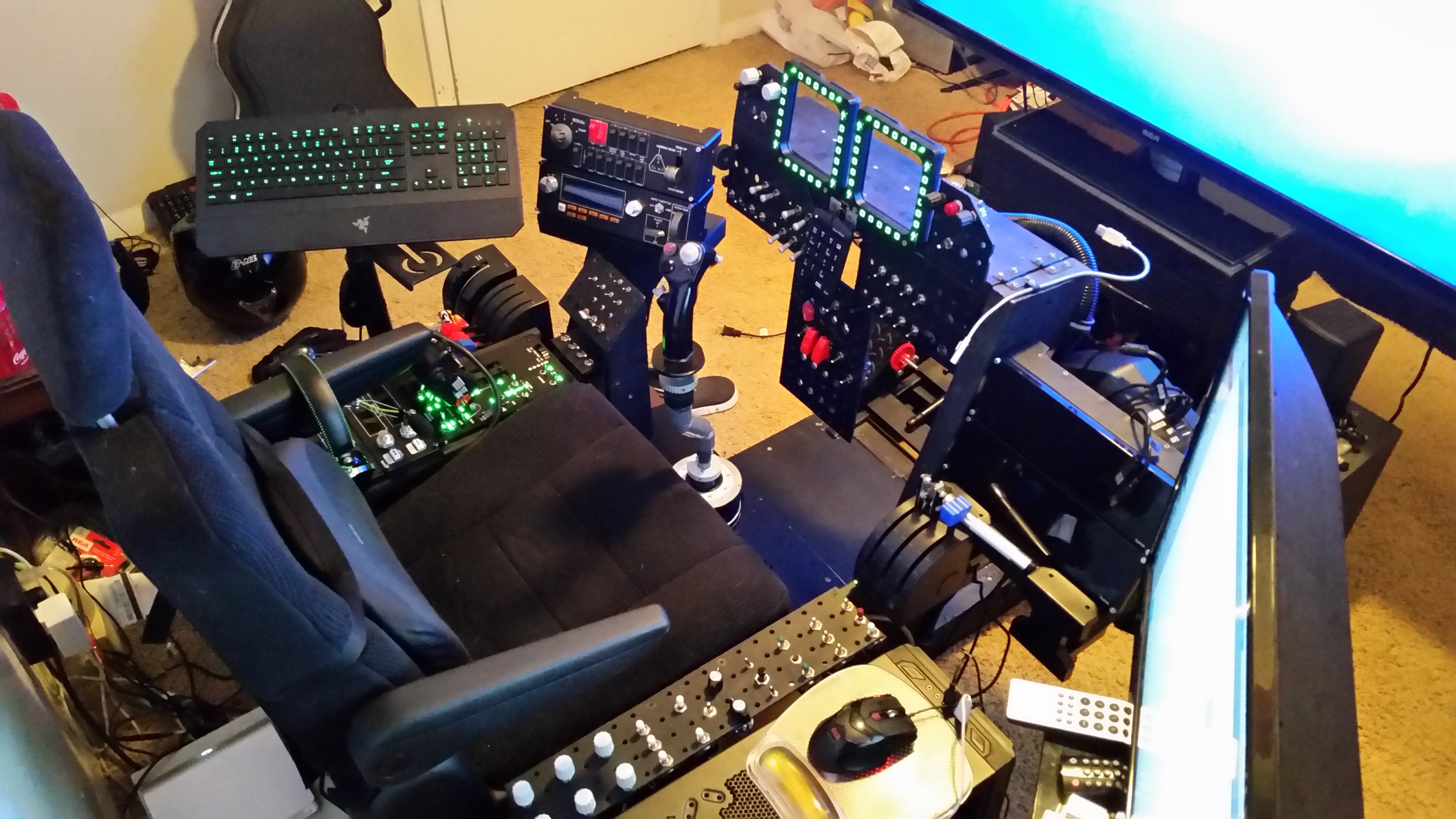 A VFR flight from Monterey to Napa Valley, with a nice visual tour of the Santa Cruz mountains and San Francisco along the way. This is my first flight in the Orbx NorCal scenery, and it’s a great package. I call it a “fantasy flight” because it’s a trip I’d love to make in real life.

Also in this flight I’ve tried, at a viewer’s suggestion, incorporating into the GoPro video some clips of the panel and side views shot with my phone along the way. Let me know if you think it works. Thanks for watching.

While there are thousands of folks doing flight simulation out there, interestingly there aren’t a lot of current flight sim blogs (although there are plenty of abandoned ones). So I was happy today when I can across Jerry Taylor’s Position And Hold. I’ve only seen the first post or two, but it’s provocative and well written. I look forward to being a regular reader.

I’ve been told by several folks that early in my flight training I should fly both high- and low-wing aircraft so I could compare them and then settle on one for the remainder of my training. So today, after getting about six hours to date in a Cessna 172 (high-wing) I took a lesson in a Piper Warrior II (low-wing). Here’s the bird … 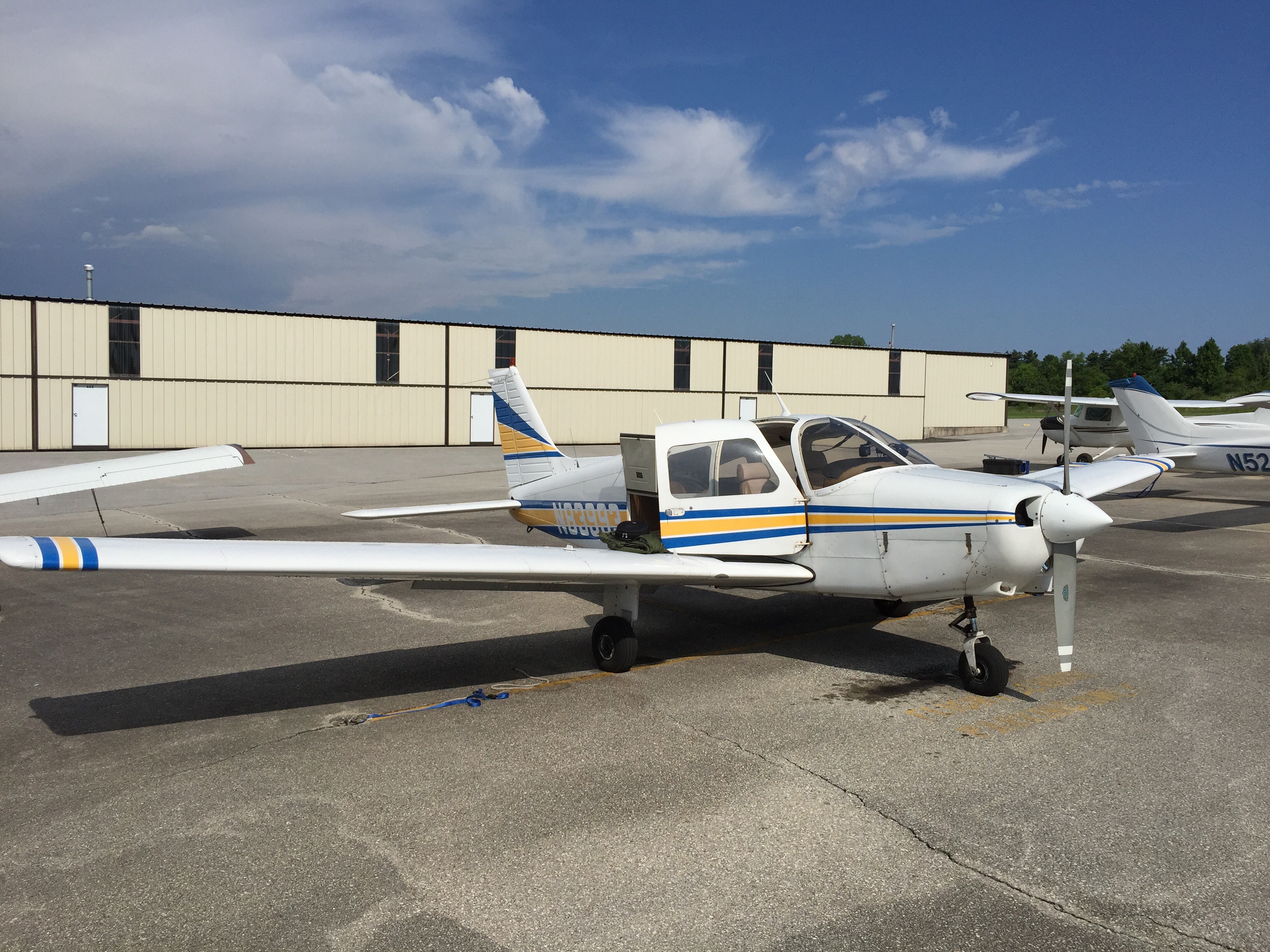 The verdict is that I really liked the Piper. While it’s a smaller cabin, I felt more comfortable, in particular because the Piper feels more like sitting in a car while the Cessna can feel like sitting in a truck. Visibility was better for me, both of the airfield in the pattern and up front over the cowling. Here’s the view up front: 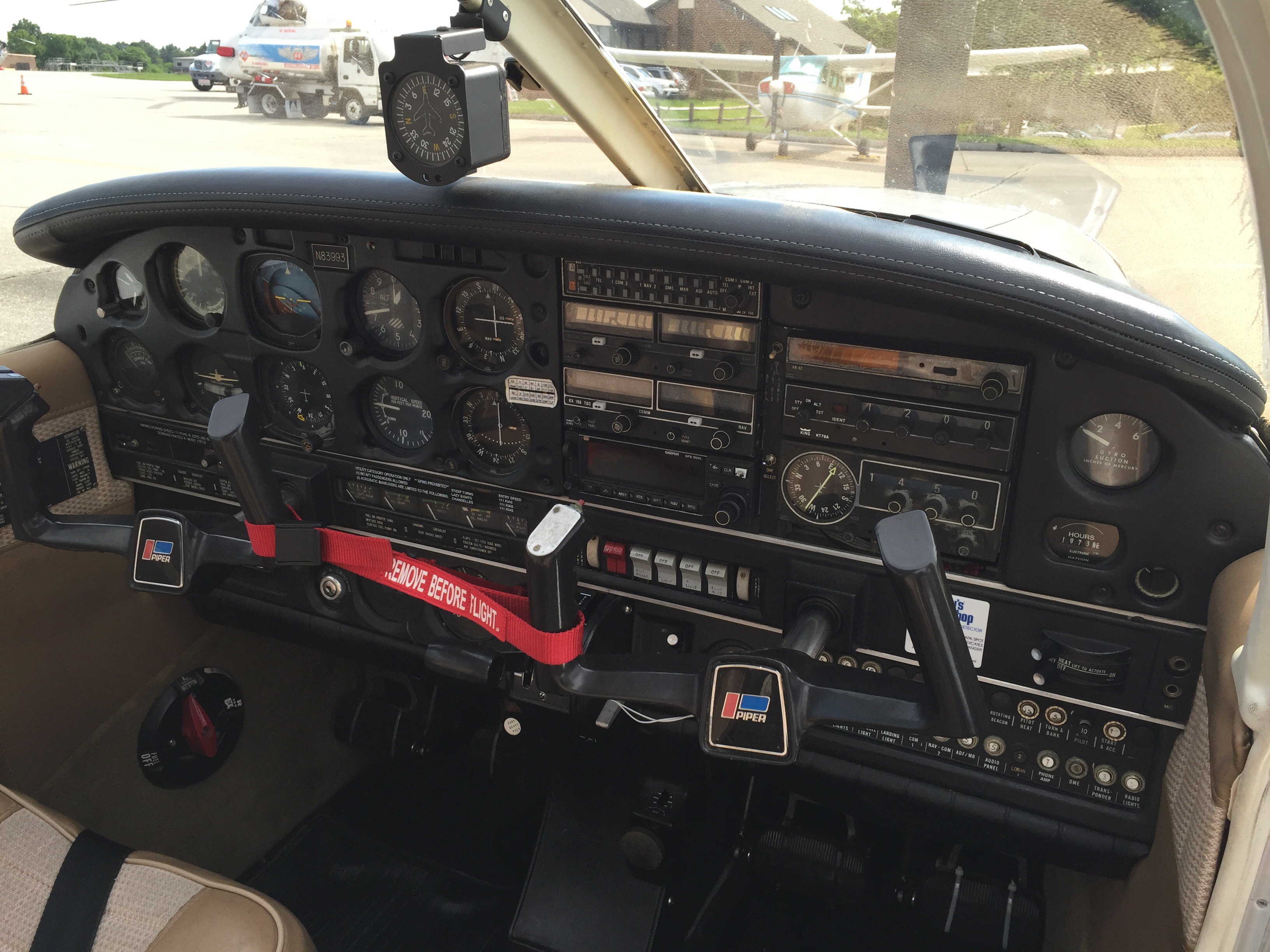 The Piper moves around a bit more, and I needed to use much more rudder (or so it seemed) than with the 172, especially right rudder on takeoff. And while low-wing aircraft experience more “ground effect” than do high-wing aircraft, meaning they can float a bit longer when landing and take a bit longer to climb off the field on takeoff, for me the Piper was easier to land than the Cessna. Even though it was my first time in the airplane, I felt every landing I had today was better than those last Saturday. Maybe that’s the effect of experience, but maybe not. Either way, I felt a lot more effective landing today, even with a slight crosswind.

So I’m sticking with the Piper. The only immediate downside is that the basement sim is laid out as a Cessna! But that’s okay, I can still fly a Piper in the sim and work Piper checklists. I just have to remember that the flaps in the Piper are a big manual handle like an emergency brake and not that little lever like in the 172 … 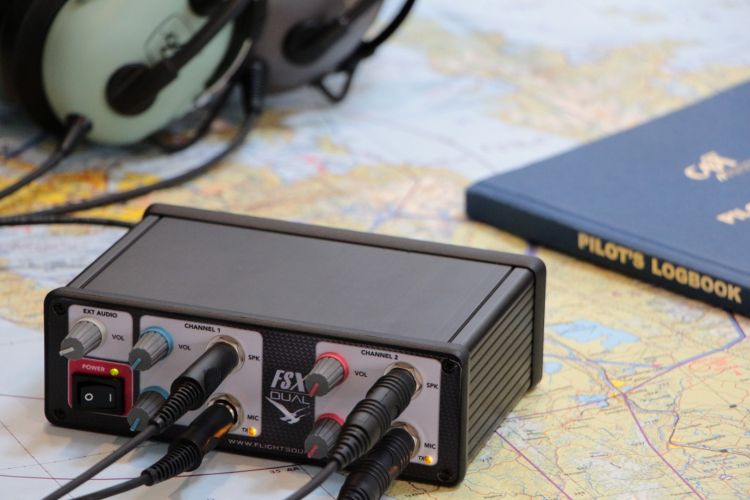 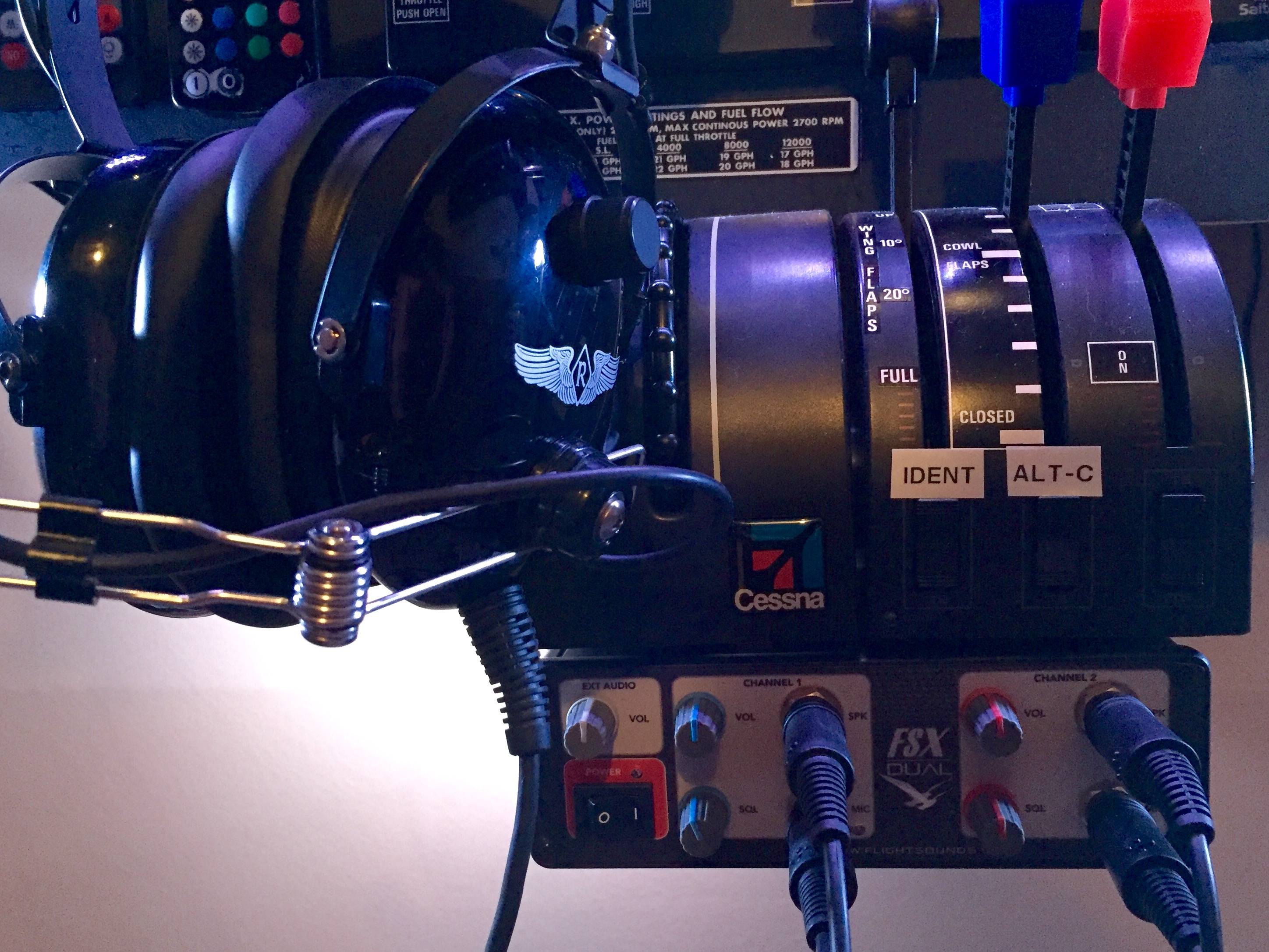 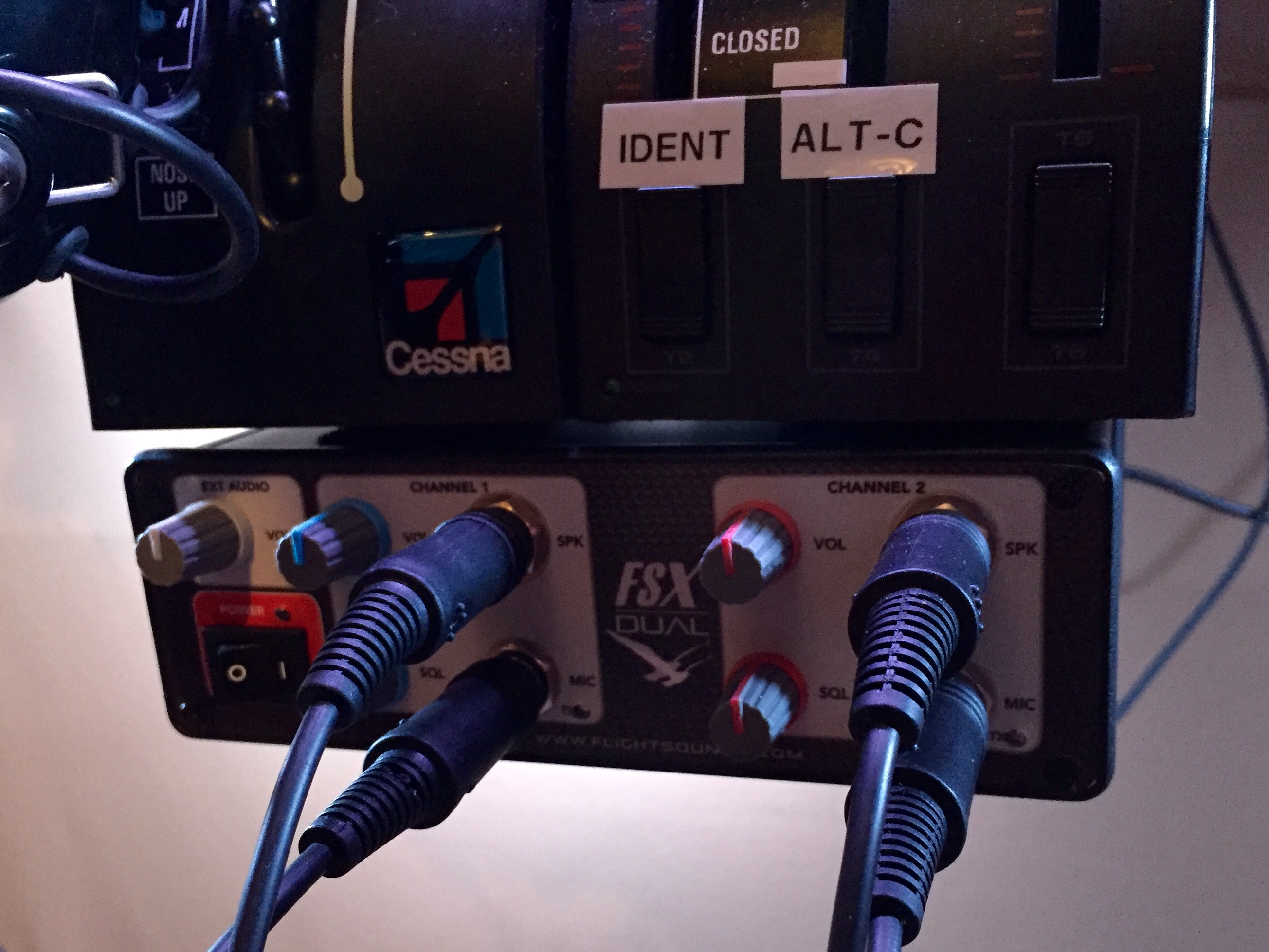 PilotEdge controller Marcusmmc is streaming his scope live now on Twitch. Worth watching if you’ve ever wondered about the controller’s side of things.

And how about this: you can embed the stream! I’ll do that here …