The past few days I’ve been writing about my trial on PilotEdge, the as-real-as-it-gets subscription ATC service that covers most of the SoCal operating area. My first flight was all nerves (and a learning moment), the second more relaxed and fun. Today I went for flight number three, which was an attempt to qualify for the introductory VFR rating in the PilotEdge training curriculum (what they call a V-01 rating).

To qualify for the V-01 rating the pilot needs to start from the ramp at a controlled airport, get clearance to do pattern work (fly “closed traffic”), transition from clearance delivery to ground to tower control, make three loops of the pattern, and exit back to the ramp, all under ATC control and observation. I decided to do this at John Wayne Airport (KSNA) both because it is the airstrip used in the training examples, and because it’s Class C airspace and in a busier area of the coverage territory. I flew a few touch-and-go laps of the pattern there last night while not on PilotEdge just to get used to the scenery and pattern, and then today over lunch gave it a go.

It all went great, and I qualified for the V-01 rating on the first try. Now I can go to the next level of training, which is a point-to-point VFR flight with ATC flight following. The controller was great, and I did pretty well every step of the way. The PEAware tracking system captured the trace of my flight even though there was no flight plan as I was in tower control the entire time. 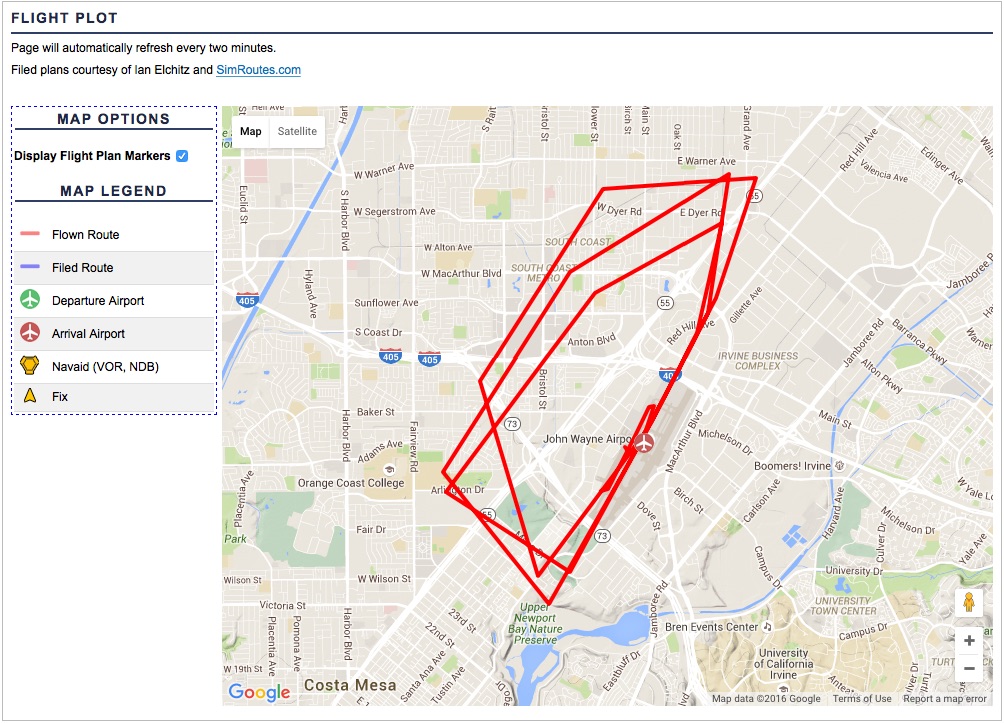 The trace reports in time intervals, so it’s not a smooth trace, but you can see the pattern. I’m going faster downwind than upwind, which is why those turns are a bit more oblong. And I need to work on staying to pattern altitude (1,00o feet in this case – gotta work the trim wheel a bit). But overall all went well and I look forward to the next bit of learning and training on PilotEdge.