I’m happy to say that today I completed the V-3 VFR rating on the PilotEdge ATC network. This is the most challenging of the visual flight rules ratings, and I’m proud to say I passed it on the first try!

The requirements of the V-3 rating, per the PE training site:

This advanced rating involves transitions of complex airspace, and knowledge of published VFR routes around LAX. The pilot will depart KSNA, and fly at least two of the published LAX Bravo transitions, choosing between:

and then ultimately land at Torrance (KTOA). The pilot is not permitted to land at any airports prior to landing at Torrance.

What this means in English: The area around LAX is indeed complex airspace, as you can see in this image from the LAX sectional chart (click it to see it full-sized) … 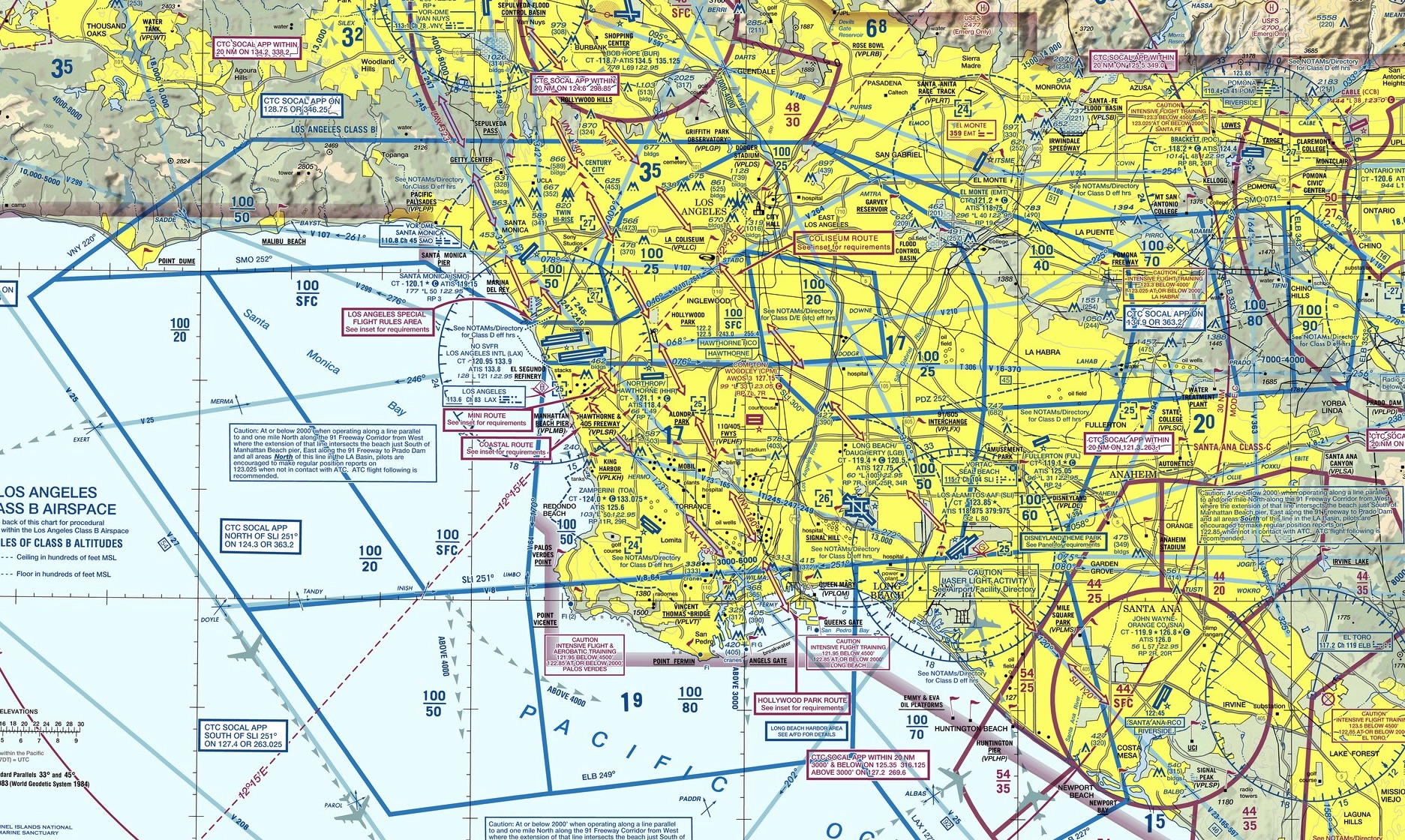 There’s a lot going on in this airspace, but the most important part of it is the LAX “Bravo” airspace, which is airspace that an aircraft is absolutely NOT allowed to enter unless it is given permission to do so by ATC. Once inside the Bravo, that aircraft has to remain under ATC control, and many only go where ATC says it may go. This is to keep aircraft from bumping into each other in congested airspace. The LAX Bravo is denoted by the blue lines in the chart, and they fit together like pieces of a puzzle because the space is in three dimensions. It has a ceiling of 10,000 feet throughout but varying floors based on where the air traffic is being routed by LAX. You can tell what those limits are on the chart by the stacked blue numbers in each blue section (e.g. 100/50, which is a ceiling of 10,000 feet MSL and a floor of 5,000 feet MSL). So in 3-d the LAX Bravo actually looks like this:

But if you are not flying into or out of LAX, how do you get north or south over the LA basin without flying 100 miles out of your way? You do it by crossing one of five Bravo “transitions” set up by the FAA. I’ve annotated the chart below to show the outline of the LAX Bravo in pink, and four of the transitions across it in bright blue (a fifth, called the “Los Angeles Special Flight Rules Area” is a bit harder to explain and I’ll pass on it here): 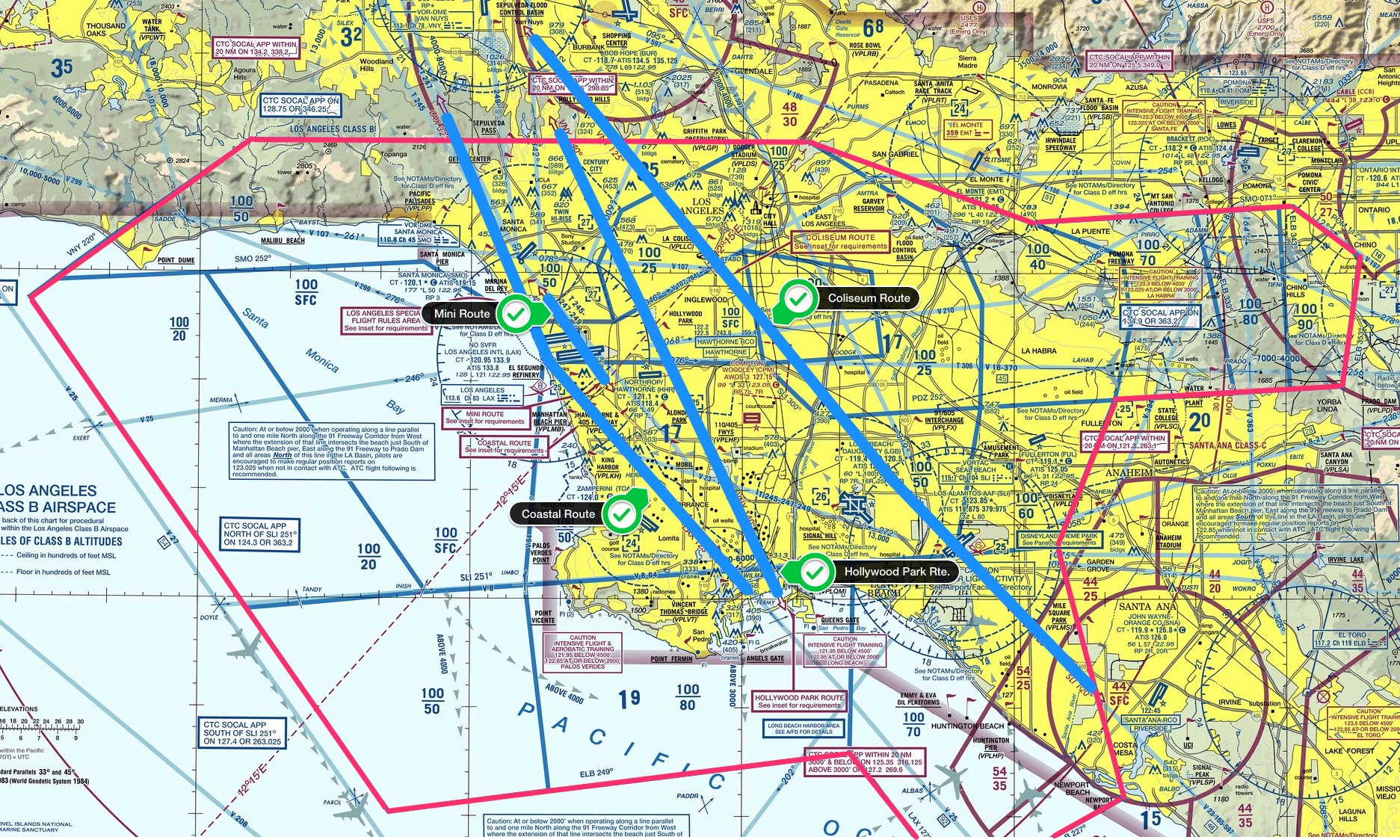 Again, you can click on that chart to make it larger. The four primary transitions are the Coastal Route, the Mini Route (which goes directly over the LAX tower and is quite narrow), the Hollywood Park Route, and the Colosseum Route. Each has its own set of rules and altitude, because as you can see in the 3-D image of the Bravo there are a lot of places where you can fly under the Bravo, most notably right over LAX itself where the Bravo is most narrow (which make sense because there all the traffic is arriving or departing from the East or West). 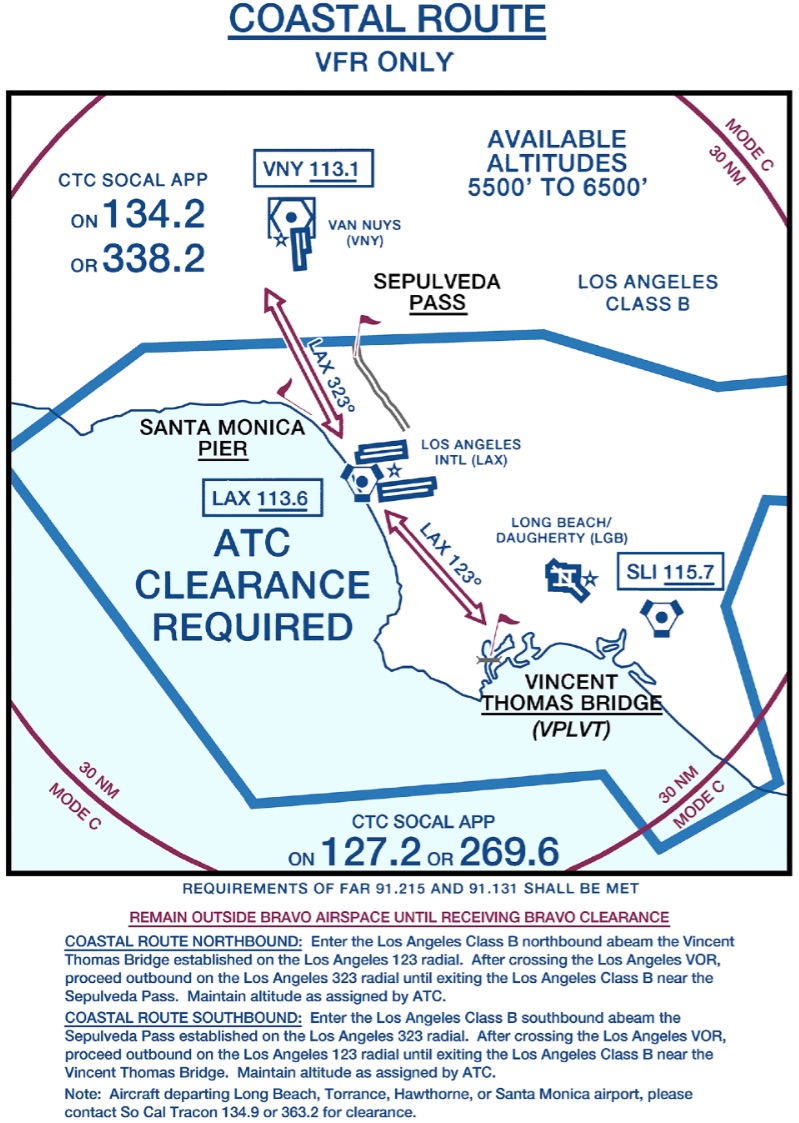 The Mini Route going south is more demanding. You fly under the outer shelfs of the Bravo on the way in, fly over the Santa Monica VOR, and then on its 128 degree radial you fly directly over the LAX tower to the Hawthorne & 405 Freeway visual reporting point. You start with Santa Monica tower, then go to LAX tower, then to Hawthorne tower, all within about two miles. Here’s the information from the sectional on the Mini Route: 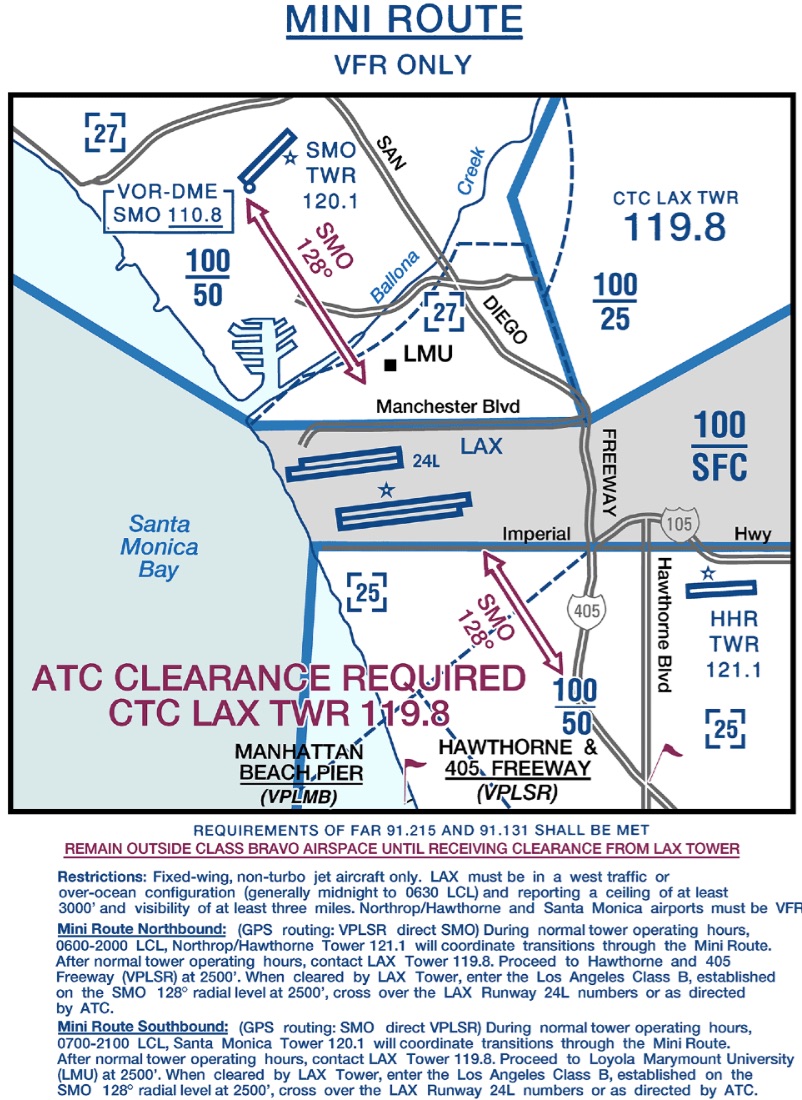 To complete the V-3 rating, you then need to go to Torrance tower after that for landing. Here’s the flight plan I mapped out for the flight (starting at John Wayne airport at the bottom right): 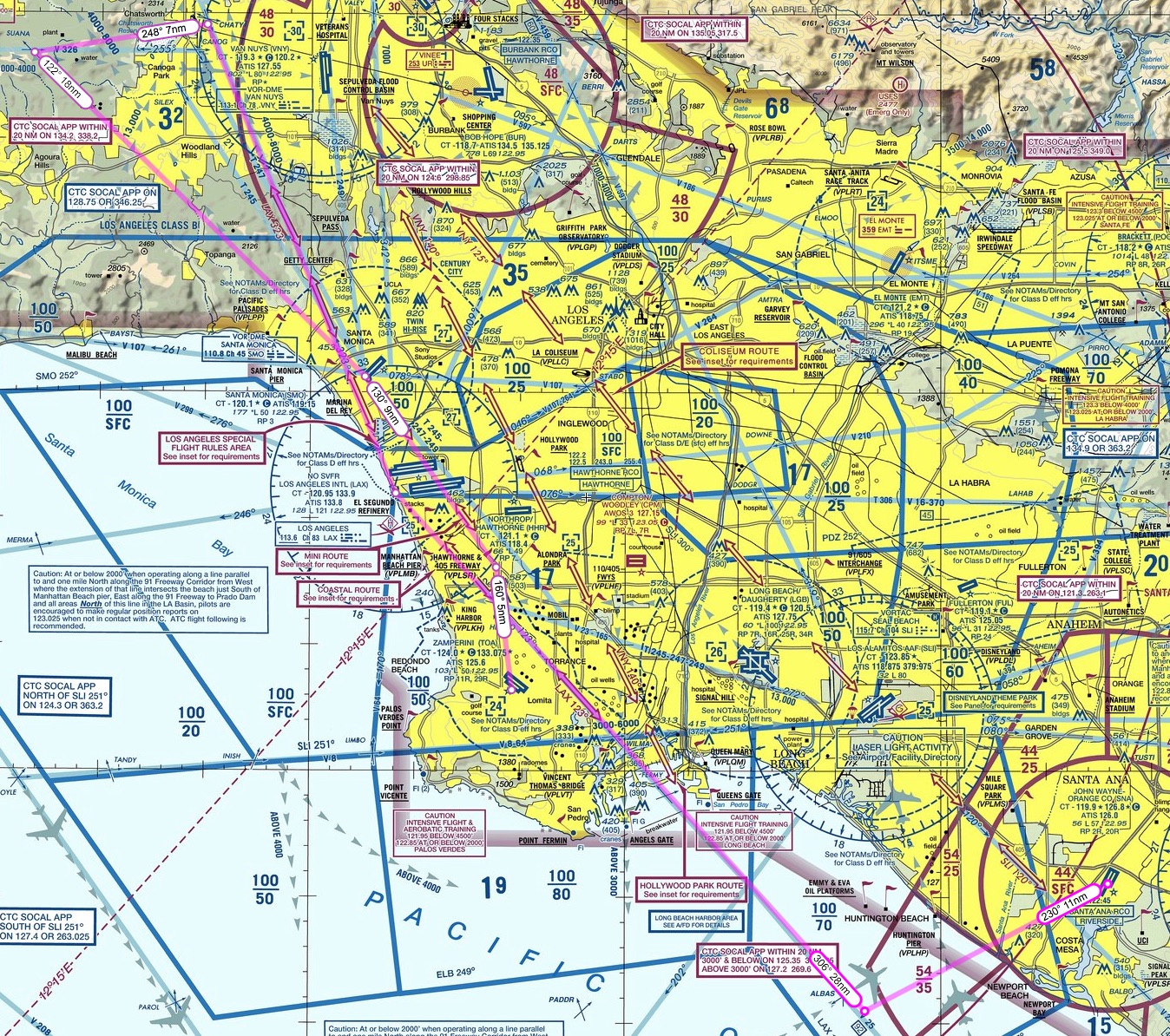 I’m happy to say that all went according to plan. A solid autopilot made it a heck of a lot easer, as I was able to focus more on the radios while letting the altitude and directional tracking do their things. I did somehow mess up my autopilot right in the heart of the Mini Route, though, and flew that section directionally by hand, which was fine. The approach and landing in Torrance was all by hand to, of course. Here’s the flight track data (ignore the blue line – ATC noted the flight as John Wayne direct to Torrance for flight planning purposes, but knew I was going via the Coastal and Mini routes): 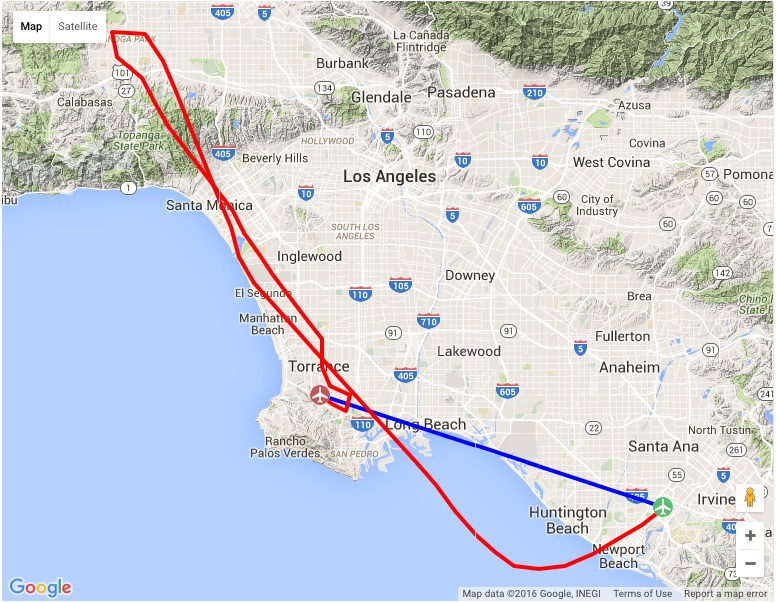 It really was a lot of fun. One reason I think it went so well is that I watched the training video for the flight, and then flew it once or twice on my own to practice. It was really helpful knowing what to expect visually and timing-wise, and I’d encourage anyone trying for the V-3 on PE to do the same. I also had a radio plan written out, with what calls to make when, frequencies, altitude changes etc., so I could keep track along the way. With so many handoffs it’s easy to think you’re talking to SoCal approach when really you’re talking to Santa Monica tower. All told, here’s the list of radio contacts for my particular flight:

PilotEdge records all their radio shifts to help with training, and I went back and pulled the mp3 files and edited together the calls for my flight. You can listen to it by clicking the play button below, and my call sign is Skylane 15 Juliet Golf.


The PE software does a nice job of automatically deleting any dead air, so it’s compressed significantly from the actual flight time of just under an hour. I say that also so nobody thinks PE is always this busy, although sometimes it is. I hope you like listening to it, and thanks for reading about my PE flight across the LAX Bravo.

2 thoughts on “A V-3 Rating On PilotEdge”